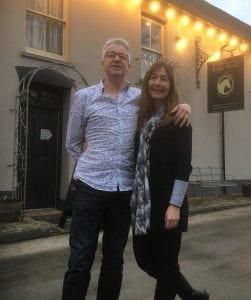 The Nag's Head is independently owned and run by Dewi and Jacqui Davies who came home to Wales from England in 2003 to take the helm at the award winning family resort called Clydey Cottages.

Dewi was born in Gorseinon near Swansea and Jacqui in Lancashire. They have long considered Pembrokeshire as their home, and when they first stepped through the door at The Nag's Head they fell in love with it and are hugely excited about taking it on and making it their next, life changing project.

Welshness and "local" are hugely important to them both. Dewi is Welsh speaking and Jacqui is learning the language, they have three children Tomos, Dafydd and Catrin all of whom speak Welsh too.

They are passionate about providing a service and "Croeso" welcome that makes people feel special and well looked after.

The kitchen is run by our Head Chef, Jai Johnson supported by his talented kitchen team. The front of house team is managed by Dewi, and the bar by Zoe Noble, who, along with the owners, are dedicated to providing you with a service of the highest quality.